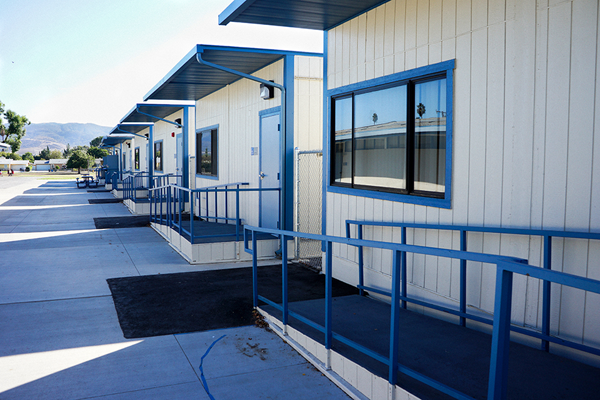 WAISMAN IS HAPPY TO ANNOUNCE:

Waisman Construction has been awarded the following project:

Description: Existing school site had three relocatable buildings that needed to be temporarily moved, while demoing three existing builds. The site needed to be cleared out in order to allow the area to receive a total of seven relocatable buildings, three existing and four that were relocated from two other schools. Underground installation took place for new utilities, Fire Alarm, DATA, and electrical, including a full re-design of irrigation system. Site had to be fully graded to allow for new AC and concrete flat work, and 18” curb for new playground area. Upon completing the site received seven refurbished classroom building with carpeting, paint, casework, and downspouts. On the outside of the buildings there was new security fencing installed, trees and hydro seeding.

Waisman Construction recently completed a renovation of the Kavli Theatre lobby at the Thousand Oaks Civic Arts Plaza. Guy and his office staff were professional helpful throughout a very difficult project. Due to limited theatre availability, Guy scheduled work as effectively as possible to limit the impact to operations. The Waisman employees and subcontractors were courteous and accommodating. The completed project has been very well-received by City staff, officials and the public. We …

“In 2015, Waisman has completed almost 1 million dollars in projects for SVUSD and have proven themselves to be hard working, dependable and professional.”

Subject: Oak Park High School Building C Modernization and Field ADA Improvement projects Dear Guy, On behalf of Oak Park Unified School District and Balfour Beatty Construction we would like to thank you and your entire team for all the effort, hard work and cooperation in completing the subject projects over the summer and having everything ready for start of school!!! We know Each project was complicated and challenging with condensed construction durations and we recognize and g…